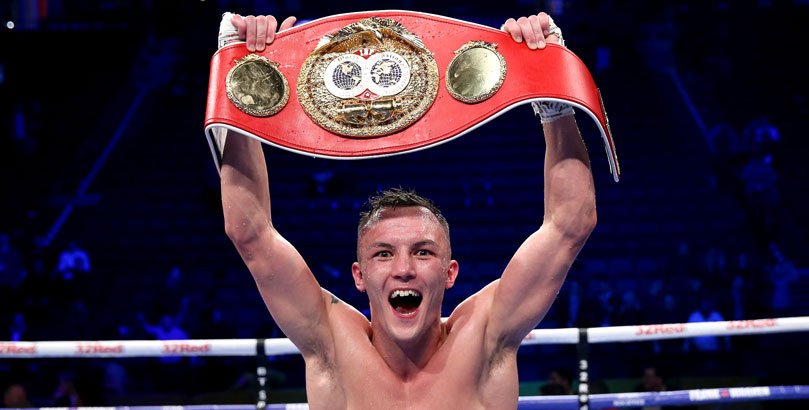 Josh Warrington takes on Yorkshire rival Kid Galahad in the second defence of his IBF world featherweight title and is 33/50 to retain his belt on points.

Warrington has proved he is one of the best featherweights in the world with point-victories over Lee Selby and two-weight world champion Carl Frampton in his last two fights.

The 28-year-old faces Sheffield’s Galahad – real name Abdul-Bari Awad – in a Yorkshire battle at the First Direct Arena in his hometown of Leeds.

Both fighters have been vocal in the build-up of Saturday’s clash with Warrington boasting a unbeaten record in his 28 fights and Galahad not tasting defeat in his 26 bouts.

However, Galahad, whose career has been blighted by a two-year drugs ban, has only fought at a relative low level, but is ranked as a closer outsider at 23/10 in the Warrington vs Galahad odds.

The Leeds fighter has won just six of his 28 fights inside the distance but is priced at 33/100 to win the bout in our Warrington vs Galahad betting tips and that is our opening prediction.

Warrington hit back at claims from Galahad’s trainer Dominic Ingle, the son of the late, great trainer Brendan, that he lacks the hunger because he was no longer in the role of the underdog.

“It’s stupid for him to say I’ve lost my hunger. Just because my lifestyle’s changed doesn’t mean I’m going to roll over and let someone take my title,” Warrington said.

“I’m just looking at Bari as someone I’ve got to get through. My hunger has not died one little bit. The hunger after winning this fight is to move on to the big unification bouts.”

Six knockouts from 28 fights does not draw much inspiration of a stoppage from Warrington, but when you look at his record closely, it proves he can pack a punch.

His first 12 bouts were over four or six rounds, which can be difficult to achieve a stoppage, but Warrington registered four knockout victories in his first five fights when he made the step up to 12 rounds.

He has since recorded a ninth-round knockout against Patrick Hyland before defeating previously unbeaten Dennis Ceylan by TKO, after knocking him down twice in the 10th round, to set up a title fight with Selby.

Galahad believes he is world-class and is desperate to prove his credentials, however, that could play into Warrington’s hands and for the home favourite to win by KO/TKO/Technical Decision or DQ is 7/2, which is our second Warrington vs Galahad bet.

Round 11 could be a knockout

Galahad was inspired by fellow Sheffield native Naseem Hamed when he was a youngster and added the IBF featherweight title to his collection when he defeated American Tom ‘Boom Boom’ Johnson in London in 1997.

“If it wasn’t for Naseem Hamed I wouldn’t be a boxer. When I met him at the local mosque, he told me if I wanted to be a champion I had to go and find this guy called Brendan Ingle,” Galahad said.

Galahad is a dangerous opponent to underestimate and Warrington is aware of that. He is set to bring a large following from South Yorkshire to Leeds and his record is impressive, albeit not elite level.

The 29-year-old has 16 knockouts from his 26 bouts so Warrington will be wary his punch power but the Leeds native should be able to see off his bitter rival.

It looks set to be a brutal fight with plenty of heavy blows and if you fancy a flutter on Warrington to win by knockout, we are tipping the defending champion to win in round 11 – valued at 28/1 – for our final Warrington vs Galahad betting tip.

Wilder vs Fury II: Where will the fight be won and lost?

76ers vs Nets: Philadelphia have too much firepower